Why is Valencia becoming a technological hub?
Back to Blog

Why is Valencia becoming a technological hub?

If you’ve been reading about the European tech scene recently, then high chances are you’ve noticed that Valencia keeps coming up quite frequently across sites like TechCrunch and CrunchBase. And for good reason! In fact, the Valencia startup scene is now in full blossom. Several high-end companies, including Groupon, have decided to move their operations to the city in recent years. Perhaps even more interestingly, Bloomberg has called it the no. 1 city to work in, surpassing Paris and London for the top spot.

In this article, we’ll go through some of the reasons Valencia is becoming the hottest tech hub in the world. Next, we’ll give examples of some of the best startups in Valencia. Let’s begin!

6 reasons why Valencia is becoming a major technological hub

1. Significant investment in the startup infrastructure

In 2018, the city authorities dedicated €100 million of public funding to local startups. They realized that turning Valencia into a tech hub would pay off in numerous ways. For starters, creating a startup-friendly environment would encourage companies from all parts of the globe to relocate to their region. As a result, they'd bring in highly-skilled talent.

Secondly, they anticipated that a flourishing tech scene would boost employment rates among locals. Finally, the city wanted to keep recent university graduates by creating a variety of career development opportunities. Suffice to say, this approach is certainly paying off!

Valencia sees about 100 new startups set up every year. What's more, Enrique Penichet, VC-company Draper1 founding partner, underlines that a bunch of companies from Valencia have closed Series A rounds, and anticipates that it will be common to see Valencian startups enter Series B, C, or even D rounds.

What makes Valencia different from cities like Barcelona or Madrid is its ability and willingness to remain interconnected, i. e. , to openly and freely exchange knowledge with other businesses.

Javier Mateo Garcia, Deputy Director of Entrepreneurship at Valencia Activa, says that you can see the new businesses mixing with the old ones, and they are happy to share the knowledge that they have. This is one of the pillars of our ecosystem. We are competitors in the market, but in the city, we are friends.

Valencias business ecosystem is not only very welcoming towards newcomers, but it's also lively, with plenty of events taking place, allowing entrepreneurs to socialize, learn, and grow.

Investors point out that its a particularly attractive destination for businesses operating in AI, cybersecurity, sports, travel, and biotech. So if you want to work in Valencia and have experience in any of these sectors then landing a job shouldn't be hard.

3. Home to tech and creative talent

There are eight highly reputable universities in Valencia with students from all over the world coming to the city to gain an education. The European Commission has granted Valencia an award for having the best talent attraction program, so its hardly surprising that its considered the national talent factory. In 2012, the world-renowned Music College Berklee set up its European campus in the city.

What attracts students to Valencia goes beyond great universities. They love it for low living costs, a comfortable lifestyle, sunny weather, and most of all the opportunity to meet professionals from the tech scene.

4. Growing number of incubators and investment

Every startup dreams about securing funding that would enable their brand to gain traction, and Valencia is the perfect place for finding investors. Both individual and institutional investors come to the city to find the next big thing in tech and their numbers are growing.

It's quickly becoming one of Spain's top incubators offering the best accelerator programs, with BIGBAN, a private nonprofit angel investor network, being one of the most prominent ones. They've invested over 40 million in 300 companies, including Aerox, Sefici, and Jeff. To ensure continuous growth, corporations and local governments sponsor various initiatives, such as the accelerator program – Startup Valencia. They're home to over 1000 startups, providing them a space to learn and find investors. 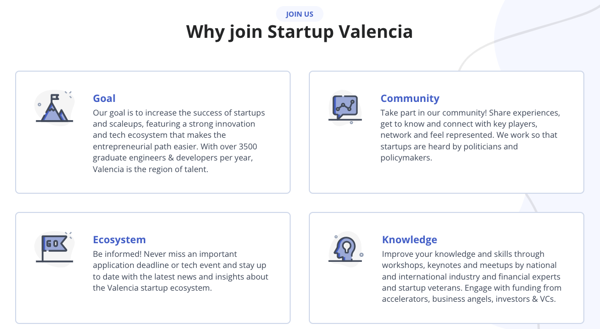 Due to the low cost of living in Valencia and affordable renting spaces, companies can operate at a fraction of the cost they would incur in places like San Francisco and London. This is a particularly attractive perspective given how the COVID-19 pandemic has put the need for being based in bustling cities into question.

One of the most prominent examples of companies moving to more affordable areas comes from the U. S.  and from none else but Meta. In 2021, Facebook's parent company made headlines after announcing they would be moving hundreds of jobs to Texas, where they've leased large office space at a much lower rate than what they were paying in Silicon Valley.

Finally, Valencia has been voted the "Best city to live" in a survey conducted among 15,000 expats worldwide. On top of career opportunities, the region offers idyllic beaches and a strong culinary and cultural scene. Perhaps even more importantly, it offers inexpensive housing and healthcare a rarity in many other tech hubs around the globe.

The city has cycle lanes, making it easy to get around and commute to work, and has also seen numerous co-working spaces set up in recent years. All this justifies why people choose to work in Valencia, and why the city has been voted the place to live and thrive.

Jeff is arguably the most well-known Valencia startup. It's a mobile app, which simplifies the process of laundry cleaning. Clothes are picked up from customers' homes, cleaned, ironed, and returned within 24 hours, for a low charge.

Jeff is considered one of the best startups in Valencia. It has raised $32.9 million in funding and has a monthly growth rate of 30%. Within a year of its launch, it opened offices in the three major cities of Spain  Barcelona, Madrid, and (of course) Valencia.

As of March 2022, Jeff is available in more than 30 countries and has recently expanded into the United States with its first U. S. -based location in Miami, Florida.

Principal33 is one of the fastest-growing software development consultancies in the city. Like many other tech brands in the region, it was established just a few years back, in 2019, and has been growing dynamically since. In fact, in 2021 alone, the company has doubled its workforce and is now focusing on expanding its operations further across southern Europe and into the DACH region.

The company supports organizations through a number of end-to-end services  from software development and maintenance, strategic support, all the way through to cloud enablement and digital transformation. The company works with brands from a wide range of sectors  among others, those in the energy, pharmaceutical, and IT niche. Their clients include both SMEs as well as publicly-listed DAX enterprises and Blue-Chip-recognized companies.

Principal33s objective is to become the go-to tech partner for startups in the region  making them a natural choice for any Valencian companies to watch lists!

Flywire, founded in 2011, offers payment enablement software that allows companies to optimize their payment experience, all the while eliminating any operational problems, from invoicing to payment reconciliation. They support over 140 currencies and have customers from various industries including education, travel, and healthcare.

FlyWire is the first Valencia startup to receive Series D funding of $100 million. It was recently listed on the Nasdaq Exchange as a publicly-traded company (NASDAQ: FLYW).

Fivecomm specializes in 5G mobile technology for industrial apps. The company was established in 2019, as a commercial project that followed the works of Universitat Politecnica de Valencias iTEAM Research Institute. Fivecomm aims to support Valencias digital infrastructure by leveraging the potential of 5G in areas such as water and energy management.

The company offers both the software and required hardware solutions. As of 2022, their primary focus were autonomous vehicles, AI, and further customization of 5G devices.

Fivecomm has won multiple awards, such as the title of the Best Startup 2021 at the 3rd edition of the RePCV (Red de Parques Cientificos Valencianos) awards and the best "Young Company" at the 23rd edition of the NTV 2021 (Noche de las Telecomunicaciones Valencianas). These awards go miles in proving theyre one of the best startups in Valencia.

Valencia has a flourishing tech scene, which makes it a great choice for people who want to start a business as well as those who want to simply work in Valencia, as job opportunities are plenty!

Not only does it offer a supportive startup ecosystem that allows newbies to learn from their more experienced counterparts. It also attracts a lot of attention from investors seeking the next big thing in tech. Add to it low operational costs, talent abundance, and great climate and you get the perfect place for running a business.

Talk to a member of our Sales team